With a myriad of tightly-organised marathons and fun runs out there, there are plenty of options for running newbies and seasoned pros. However for those with an itch for something a little left of field, it’s hard to find a race with a different kind of challenge.

Daniel Donegan and Michael Dawson liked the idea of creating a race without the rules and boundaries of a more traditional event, while giving competitors a chance to explore the city of Auckland as if it were a giant playground. Together they created Race09, an “unsanctioned” night road race event, held monthly in the city with very few rules and a touch of mystery and danger to keep things interesting. We spoke to Daniel and Michael about this unconventional approach to running races and what makes it so special.

There is a race the first Thursday of every month. A limited number of entries are made available two weeks before the event and they go within an hour. Only the starting point is revealed when people register and the races are either a straight start-to-finish, or an out and back with checkpoints.

On the evening of the race, competitors meet at the start point at 6.30pm to collect their race number and the map for that race – that’s when they find out either the finish point, or the checkpoints they have to hit during the race. How they get there is entirely up to them.

What inspired you to start Race 09?

We wanted to do something for Auckland that celebrated the city itself as a fun place to be, like a giant playground at night. We also wanted something that wasn’t really formal, planned or sanitised. There is so much of that already in everyone’s day to day life; Outlook planners, Zoom meetings, task analysis, etc.

We didn’t want something that was contrived, based around influencer culture or ‘organised fun’. It’s competitive, loose, slightly more on the dangerous side and appeals to some athletic people.

Why are the races at night with very few rules or formalities? What level of runner does this appeal to?

We make no apologies for our race not being for those new to running. There are a raft of excellent events, groups, and races out there for people new to the sport. However, we aren’t a race just for the fastest on the block.

With the possibility of being able to choose the route you run, we have seen a lot of instances of people who might not be as quick as someone if they were on a track or an organised race, being able to finish much higher up the field because they have taken some shortcuts and some risks and that is the ‘win’ itself for a lot of them. 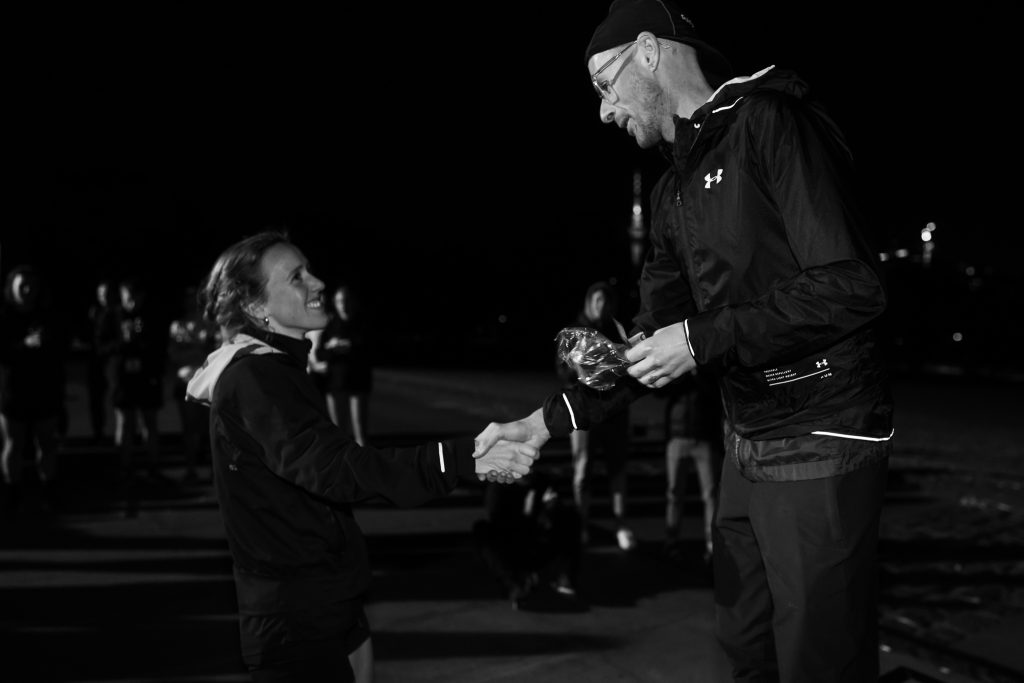 Why do Race 09 competitors prefer this primal style of racing, to a more traditional running race?

“Competitive running can be a high pressure environment, you’re a one woman team so the pressure of performing well at nationals or hitting all your workouts can feel a bit lonely and tiring.

Race09 takes a lot of that pressure away. It’s gutsy, the route is uncertain, everyone is racing for the fun of the event and there is an element of risk as you sprint across busy roads (carefully checking both ways, of course).

You’re too busy focusing on hitting the checkpoints or the route, all these variables, that I often forget about the pressure of performance. It’s exhilarating, and to be honest, just really fun”

What crazy stories have you heard about the lengths competitors will go to during the race?

On our most recent event, the finish was on a quiet dead end street in Newmarket. While most of the runners took the expected route from Broadway, there were a few who ran through the mall car park and finished from the complete opposite direction, shaving off a couple of hundred metres.

With races finishing up Mount Eden and in the Domain, we also had some people with minor injuries from falling while taking some grassy shortcuts up hills. 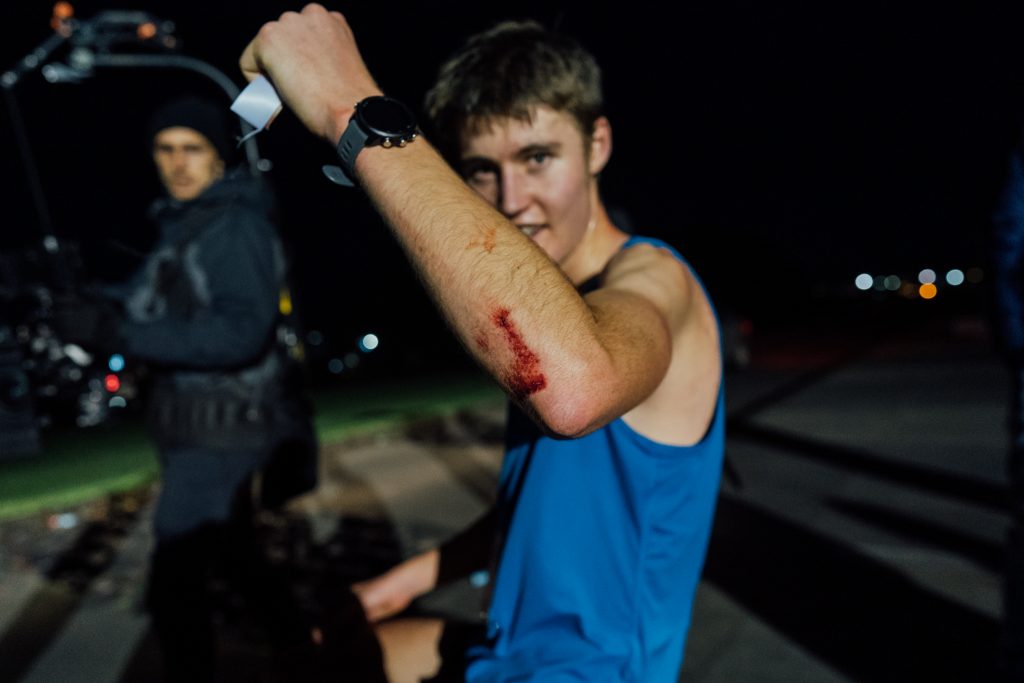 The lengths the organisers go to is just as important. As is tradition, we mark the start and finish with sprayed chalk.

For the last race, the start was on the bus lane in Broadway, Newmarket. Jess, one of our volunteers did the honours. What Jess didn’t realise was that sitting right there at the lights were two police officers in an unmarked police car. After some Q&A they were cool about it and the race was able to begin

“Final leg of the race, running up a dark path in the Domain and a tree root took me out. I saved myself from a face plant using my middle finger to break my fall and managed to continue running, but that’s when I realised the finger was at a super offensive angle and blood was streaming from the joint. I took a moment and noticed the finish line and the hospital A&E were equal distances so I went for the A&E. I still regret not finishing the race, but made it back for the third race and no accidents to report” – Competitor Anna Boss. 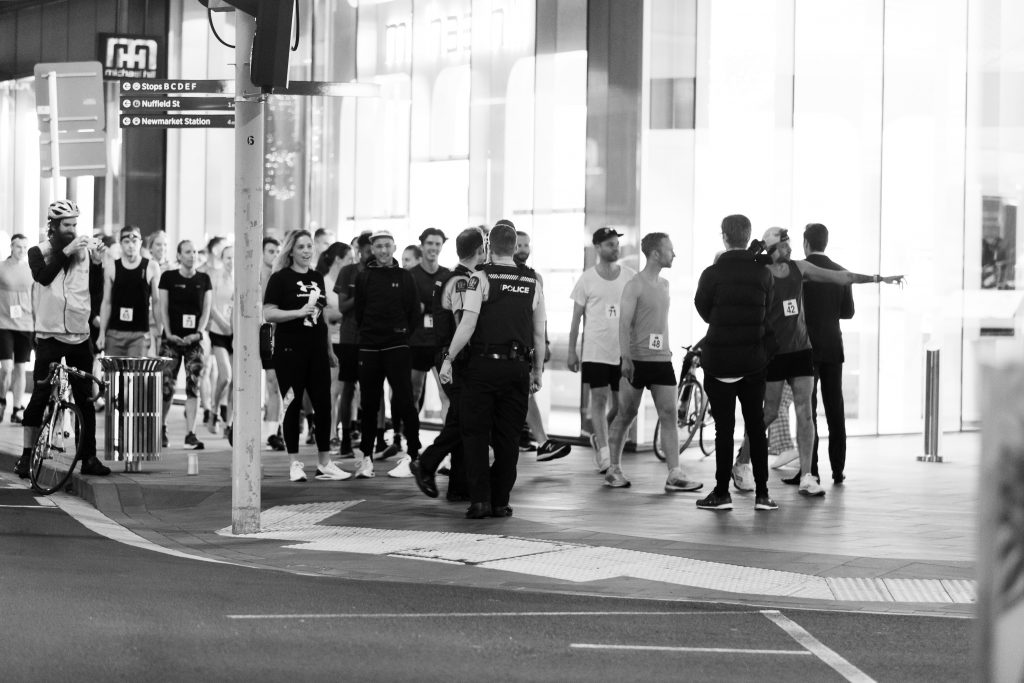 With a move away from “influencer marketing” and an air of mystique to the races, how do you get the word out there about Race 09?

We didn’t set out to be popular or have a massive following but the people who like the race REALLY like the race and they tell their friends. The photos tell the story to a large extent. We have a small social media page on Instagram, which is where we share most of our updates and news. 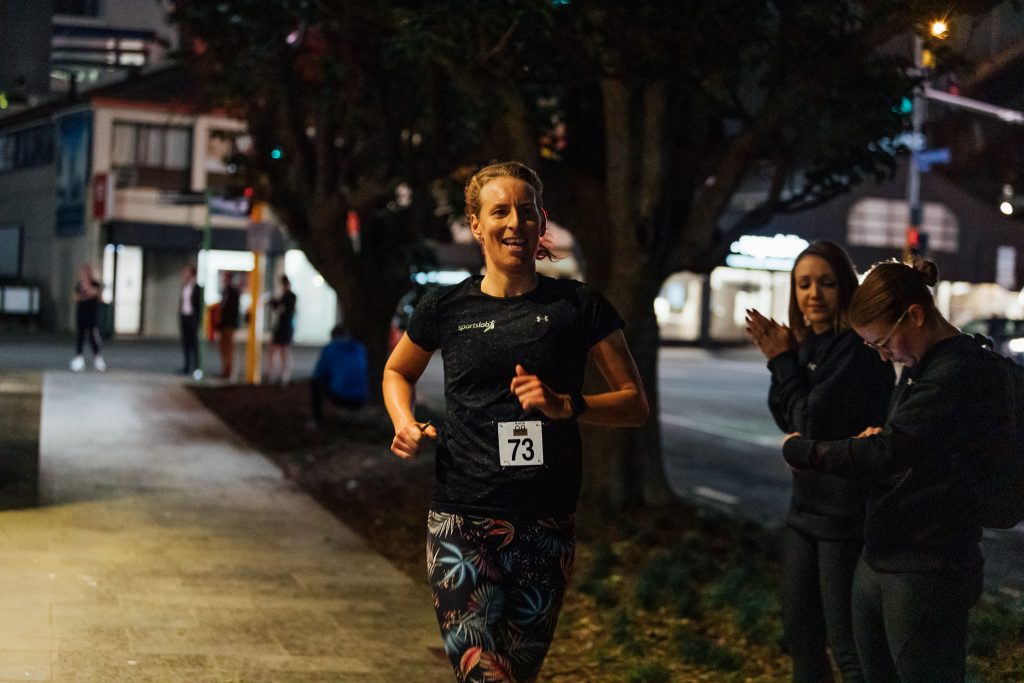 How do partners like Under Armour help make the race happen?

We are lucky to have some very key partners supporting us; the likes of Ciele, Halltertau and Under Armour. Under Armour is fully on board with supporting our vision for our race and our community. Being able to work with like-minded partners to bring our race to life has been invaluable.

Utilising the Under Armour Newmarket brand house for third race enabled us to have a start/finish venue that could cater for our race size, while also still feeling intimate and approachable.

What events have you got planned for the coming Summer months?

We have a lot of ideas. We are always discussing and bouncing off each other and lots of people from the running community throw ideas at us, usually while out running which is cool.

We are continuing with our monthly night race for the rest of the year, which gets better and better every month. Although we may have some rad new additions to the RACE 09 calendar.

All images by Michael Dawson.

I Tried A Les Mills Grit Class And This Is What It Was Like
An Expert Goal Setter Shares Her Tips For Making Goals You Can Actually Achieve
Under Armour Understands The Only Way Is Through
Unlock Your Personal Best With Round The Bays And Under Armour
The Under Armour Connection
Training What’s Under The Armour
Load More
PHP Code Snippets Powered By : XYZScripts.com