This Barn-Like Yet Contemporary Home Is The Perfect Family Haven

When Ben and Ally Green embarked on their design-and-build journey with Box™, they were completely chilled about the process. “Their all-in-one package removes all the stress,” says Ben. What the couple didn’t anticipate was a last-minute surprise.

To be fair, that wasn’t the fault of Box™.  As Ally explains: “When we first started building, we only had three children, so the house was designed to accommodate that.” Then little Moses came along.

The Greens have had a few big life changes to deal with over the past year: a newborn, a new house and a new career for Ben, who decided to leave his corporate job to start his own business. Keeping the build on an even keel, then, was important from both a financial and mental-health perspective.

Nine years ago, the couple was fortunate to have secured a picturesque Onehunga site overlooking Manukau Harbour by buying it with Ally’s parents. “They wanted to help us into the Auckland housing market and the land came with two existing homes, so we went halves on it,” she explains.

The young family lived in a beautiful but draughty bungalow at the front of the site. When the quotes and plans to renovate came in, the steep cost was a shock. “One of the prospective builders asked if we had considered starting from scratch,” says Ally. They hadn’t. But when the same builder pointed them towards Box™, Ben and Ally saw the light…both figuratively and literally.

In the end, choosing to bowl and build was an easy decision. “We liked Box™ right from the start; the team was so personable when we met them and came to visit our site the very next day,” says Ally. Their brief was for everything the old house was not. That included a large, open-plan living space so they could keep an eye on the children – and to make the most of the south-facing view. Mostly though, they asked Box™ to work their magic on the long, narrow section to capture as much light and sun as possible.

Apart from that, the couple was laid-back about their requirements. “We were happy to tap into their expertise,” says Ben. “We didn’t have our minds set. We trusted what Box™ proposed.”

That included the cladding. While Ally and Ben had a vague idea they wanted cedar, they were gently steered towards Abodo instead, a thermally modified timber with a similar aesthetic that is more durable and cost effective. This cedar-stained pine, teamed with dark-toned Weathertex, gives the 155-square-metre dwelling a two-toned appearance; its strong single gable is barn-like yet contemporary, a look which neatly straddles the rural/suburban divide. Generous decking on the north side runs seamlessly out from the living room to enhance a feeling of spaciousness delivered by cathedral ceilings and deep eaves provide protection from the elements.

The interiors programme is over three levels with two bedrooms of equal size located off the main living area which has a break-out TV room for keeping youngsters occupied on rainy days. A half-storey down is the master suite, main bathroom (including a full wet room) and a fourth bedroom. A garage and storage area with internal access hunkers into the slope beneath the living zone.

The Greens moved in on Valentine’s Day 2020 – “It was very romantic, unpacking all those boxes,” quips Ben – and then, along came, lockdown…“Let’s just say, we spent a lot of time at home during that first year. We really wore it in,” says Ben. Within a week, a trampoline and jungle gym occupied most of the lawn, there was nail polish spilled on the bathroom floor and a dent in the stairwell from an errant toy truck. But Ben and Ally were happy campers, their focus on the bigger picture. From morning to night, the house delivers easy living for the couple and the children who range in age from 10 years to 10 months.  From the breakfast-bar line-up at the start of the day, to after-school play time, the bi-fold doors flung right open, the sun streaming in, it’s all good. “Box™ put some high windows into the sloped ceiling on the east side so now we get lots of natural light in morning. It may seem like a small thing to others, but except in the middle of winter, we love not having to put the lights on until it gets properly dark,” says Ben.

Ally, who is so pleased the new kitchen is a social hub for family and friends, also enjoys the rare moments of ‘me’ time. When Ben is at work, and Moses is taking his afternoon nap, she hops into the hanging chair they have suspended from a specially reinforced ceiling. With a cup of tea in hand and a view through floor-to ceiling windows all the way across the reserve to Mangere Mountain, she drinks in the rare moment of serenity. 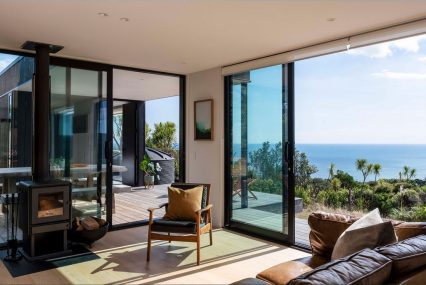 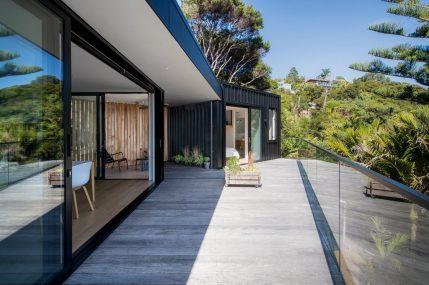 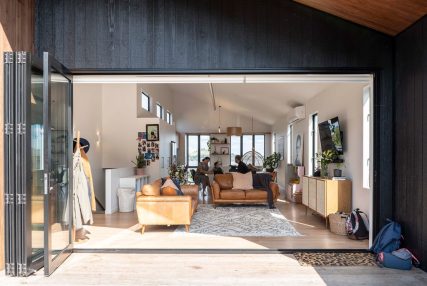 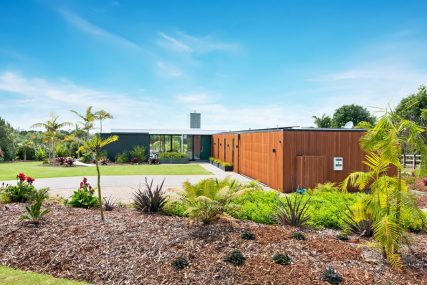 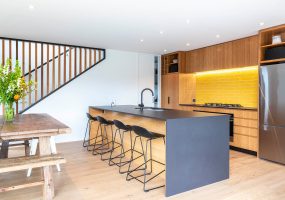 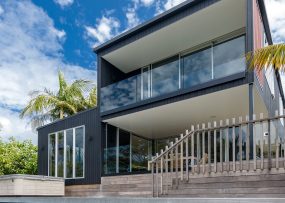 All Set For The Endless Summer
Built-In Beauties
See Inside the $19Million Malibu Mansion
A Journey In Decision Making
Destination: X-Space
Where The Renewable Energy Wind Blows