Cordis Hotel, The New Pinnacle Tower: Crafted Over A Millennia

I have a strange pastime of standing at a location and imagining what was happening there at certain points throughout time. This kind of temporal daydreaming doesn’t make for the best social interactions, especially when out and about with friends, but it amuses me. Think about it for a moment. What was happening a hundred years ago, a thousand years and even 100 million years ago, right on the spot you are reading this? Note: if you happen to be in a high-speed bullet train this might be difficult. Imagine a timelapse scene in a movie. Maybe you are cutting from some hapless dinosaur tripping into a puddle of lava, to a Moa tending to its eggs and then to a couple trying to figure out how to get into the 1920’s property market. A lot can happen in a single place when you give it enough time. 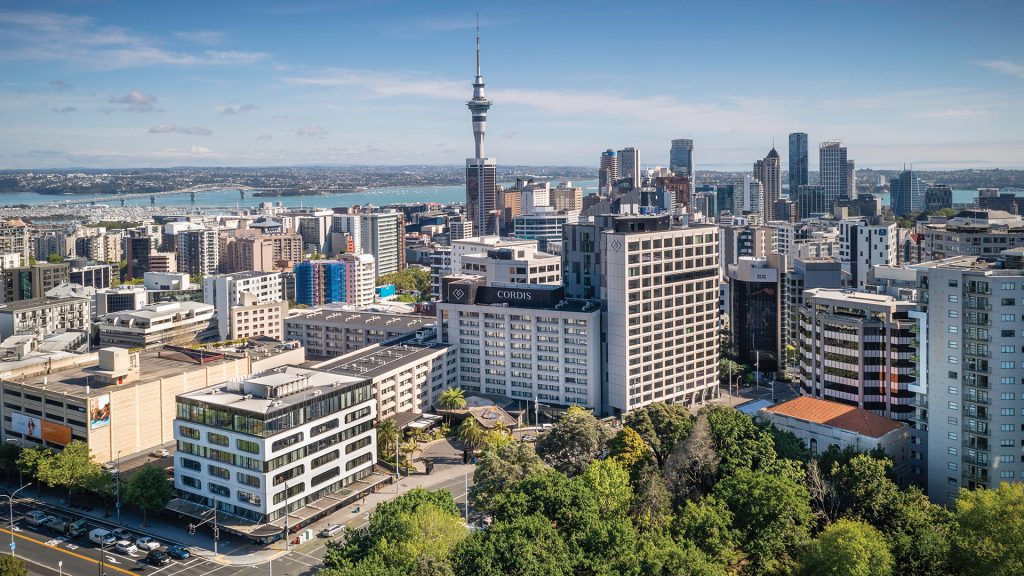 We will start inside your room, but before you check out the Cordis Dream bed and the private bar, just pay attention to the patterns on the bathroom blinds which emulate ripples of water and the Adze carving patterns as seen on a panel or a waka. The tiles meanwhile are reminiscent of our native birdlife. The interaction of white marble tile and the pattern of the carpet are also inspired by the patterns of weaving. This layering of meaning and symbolism even goes through to the smallest detail of a light fitting. The amount of thought that has gone into linking the design elements to the tower’s location is really quite something. And that’s only just the beginning. There are a myriad of flora and fauna and woven elements in the smallest of details. And in the case of featured wall panels, there is an incredible amount of storytelling.

These wall panels feature a Paper Nautilus – pūpū terakihi. The Nautilus is a very specific symbol for Ngāti Whātua Ōrākei, and speaks directly to the settlement of Auckland city, and their own survival. The pūpū terakihi needs a rare wind system to arrive at our shores and when it does, it is taken as a sign that changes are coming. It is said that two generations before the British arrived, Titahi, a tohunga (priest) of Ngāti Whātua saw pūpū tarakihi being driven by the tūāraki (north wind) toward the shore at Ōrākei. Some believe that this was a prediction of the impending arrival of the British. I like to imagine him standing there pondering that spot throughout different times. I wonder what he would make of today’s beach bunnies. Anyway, I digress, this very important shell is placed at the top and centre of a wood panel, carved to mimic the Adze carving technique used to shape a waka. The 45 degree angled directional pattern is intended to suggest the movement of the tide that pushes the nautilus, and also the sense of the bow of a waka moving through the water.

And as if that wasn’t enough symbolism for one wall panel, there is also a defined central line that juts up through the middle of the carving. This is the Manawa line. A similar strong central line is also visible on the façade of the Cordis Pinnacle Tower at the corner of City Road and Symonds Street. Cordis is Latin for heart, the Manawa line is the central artery, and represents balance and strength. This line and balance relative to the desk or sideboard below represents the important relationship between Tangata Whenua (people with ancestral links to a place) and Manuhiri (people who visit that place). The balance of one for one; how can the two groups enhance the mana of one another.

Have I made the point yet, that a lot of thought has gone into every single detail? You could probably spend a long weekend just doing nothing but walking around looking at the art, architecture and design and still be discovering new elements by checkout time. And it is just the same outside your room.

Guiding you to and from your room are corridors that have exactly the same level of attention to detail cast upon their design. They feature one dark wall around the central core of the hotel which is juxtaposed with the walls on the opposite side where the doors to the rooms are, which feature light wallcoverings, with a continuous LED light above. This is to emphasise the central narrative of graduated light “Te whei Ao, ki te Ao marama”

The idea is that when you enter your room you should be bathed in natural light so the corridor accentuates this transition. Seriously, who thinks of something like this? It’s inspiring.
Supplementing the interior design is a fantastically considered approach to a curated art collection that matches the ethos of the Pinnacle Tower, honouring its location.

This art collection is thoughtfully curated in line with a narrative developed with Ngāti Whātua to ensure the commissioned artworks best reflect Auckland’s culture. Core to this are three creative principles: Kaitiakitanga – Guardianship of the land, Te Whai Ao – the light before dawn, and The Manawa line – or the heart line that connects and unites us all.

These principles traverse a diverse range of significant works on a range of mediums including paper, paintings and sculptures by Seung Yul Oh, Joe Sheehan, Raukura Turei, Amanda Gruenwald and Nikau Hinden, as well as a key commission with the Ngāti Whātua Ōrākei weavers.

Nikau Hinden has spent much of the past decade dedicated to reviving and preserving the traditional Māori practice of aute-making in Aotearoa, as it was a skill that up until now hadn’t been practised in Aotearoa since the mid-nineteenth century.

This ancient technique becomes part of a narrative that works in with modern art approaches, like that of a series of light installations designed by Korean born, New Zealand artist Jae Hoon Lee, structured around the four elements of earth, water, fire and wind, located at each of the sixteen lift lobbies.

Other important locations are looked over by a series of bronze sculptures by Sanné Mestrom, that celebrate the unique role that female goddesses play within Māori mythology. But the epicentre of the curation is really in the Art Promenade which connects the Pinnacle Tower to the original Cordis hotel, this showcases a major piece of work by Lonnie Hutchinson and takes you through an abstract nature walk through the landscape of Auckland, featuring key moments in the origin stories of Tāmaki Makaurau. A walk through the moments that have shaped the city and now its latest important landmark.

Like all great experiential works of art, this is something that you really need to actually experience for yourself. So book a stay at the Cordis and immerse yourself in the true heart of Auckland. There’s just no time like the present for allowing yourself a little bit of luxury time travel! Enjoy a Staycation at Cordis Auckland Check out the latest offers at Cordis Auckland Treat yourself to an experience at Cordis Auckland

The Power 9
Health Spot: Natural Remedies
Yes, There Are Zombie Cells in Our Bodies… What Are They and What Can We Do About Them?
This Is Why You Should Be Putting Lemons In Your Freezer
Nourish your Skin this Winter with Palmer's
10 Functional Foods for Better Health